’10 Babies Born In SA’: Reckless and Irresponsible Journalism Of The Highest Order 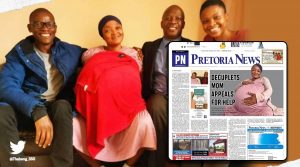 On 8 June, Piet Rampedi, editor-in-chief of the Pretoria News, authored a lead story in the newspaper and on the IOL website that stated as fact that a Gauteng woman had given birth to 10 babies and broke the Guinness World Record.
Rampedi interviewed the couple, Gosiame Sithole and Teboho Tsotetsi, at their home in Tembisa, Ekurhuleni a month before the story was published and uncritically reported their version of events about the birth without verifying the facts with the hospital or doctors involved, as required by the Press Code of South Africa.
The code states very clearly that journalists “must take care to report news truthfully, accurately and fairly.”
When other journalists started to investigate the matter, they were told by parties in the story that Rampedi told them not to speak to any other journalist and that he would speak on behalf of the family.
The Pretoria News and IOL further published a fundraising campaign for the so-called miracle babies, and published bank account details of a firm that was supposedly collecting donations for the family. Independent Media also asked its readers to deliver clothing and gifts for the children.
Shortly thereafter, Rampedi and Tsotetsi flew to Cape Town to accept a R1 million donation for the family from Dr Iqbal Survé, chairperson of Independent Media. At that point, serious gaps were visible in the story and the Gauteng provincial government confirmed that no decuplets were born in any private or public hospital in the province.
Notwithstanding the many holes in the story, Rampedi and Independent Media doubled down and continued to report the story without the basic facts having been confirmed or established. Rampedi steadfastly refused to provide the name of the hospital or medical professionals involved.
On 14 June, Rampedi and Independent Media, after sustained attempts by the rest of the country, the government and other journalists to verify the story, changed tact and started to blame Sithole, the woman, claiming she had disappeared and was not responding to messages from Tsotetsi, the alleged father.
It is now clear that Rampedi never saw the babies or had proof of their birth, but solely relied on WhatsApp messages between Sithole and Tsotetsi to report as fact that they were born. This is reckless and irresponsible journalism of the highest order.
Throughout his reporting, Rampedi purported to know which hospital Sithole, and her babies were, this has now proved to be a lie. And instead of admitting his lapse of basic journalistic tenets, Rampedi is now victim blaming Sithole, who needs medical assistance, according to the head of the Steve Biko Academic Hospital.
This entire episode ranks as one of the lowest points in the history of South African journalism. The failure of Rampedi and Independent Media to do basic fact-checking and verify grandiose statements before publication has undermined and damaged the entire journalistic profession.
The Press Code is clear that journalists should take the utmost care when reporting on matters involving children. Even though Independent Media is not a signatory of the Press Code, it is clear that all journalistic standards were abandoned with the handling of this story.
SANEF calls on the management of Independent Media to urgently institute an independent inquiry, led by an expert in media ethics, to investigate how this story was investigated, reported and responded to by Rampedi and his colleagues.
SANEF recently hosted a conference on media ethics and credibility in South Africa, that ended a thorough study into the matter, sparked by the Sunday Times’ unethical and flawed reporting on an investigating unit at the South African Revenue Service. Ironically, Rampedi was part of that reporting team and has steadfastly refused to admit wrongdoing in his reporting, despite numerous findings to the contrary.
SANEF will continue to promote ethical and credible journalism through training, workshops and interactions with newsrooms and editors across the county.
Note to Editors: The South African National Editors’ Forum (SANEF) is a non-profit organisation whose members are editors, senior journalists and journalism trainers from all areas of the South African media. We are committed to championing South Africa’s hard-won freedom of expression and promoting quality, ethics and diversity in the South African media. We promote excellence in journalism through fighting for media freedom, writing policy submissions, research and education and training programmes. SANEF is not a union.
For more information please contact:
Sbu Ngalwa – SANEF Chairperson (073) 404-1415
Adriaan Basson – SANEF Deputy Chairperson (082) 562-2113
Mahlatse Mahlase – Secretary General (083) 399-2852
Nwabisa Makunga – Treasurer (082) 555-1972
Mary Papayya – SANEF Media Freedom Chair (082) 379-4957
Asanda Ngoasheng – Western Cape Convenor – 082 610 9374
Judy Sandison – SANEF KZN Convenor (082) 571-3334
Katy Katopodis – SANEF Gauteng Convenor (082) 805-7022
Chiara Carter – SANEF Eastern Cape Convenor (082) 659-9162
Reggy Moalusi – SANEF Executive Director (071) 682 3695
Tags:Adriaan Basson – SANEF Deputy Chairperson (082) 562-2113Asanda Ngoasheng – Western Cape Convenor – 082 610 9374Chiara Carter – SANEF Eastern Cape Convenor (082) 659-9162Judy Sandison – SANEF KZN Convenor (082) 571-3334Katy Katopodis – SANEF Gauteng Convenor (082) 805-7022Mahlatse Mahlase – Secretary General (083) 399-2852Mary Papayya – SANEF Media Freedom Chair (082) 379-4957Nwabisa Makunga – Treasurer (082) 555-1972Rampedi and TsotetsiReggy Moalusi – SANEF Executive Director (071) 682 3695Sbu Ngalwa – SANEF Chairperson (073) 404-1415
Share on FacebookShare on Twitter
Robert TapfumaneyiJune 15, 2021